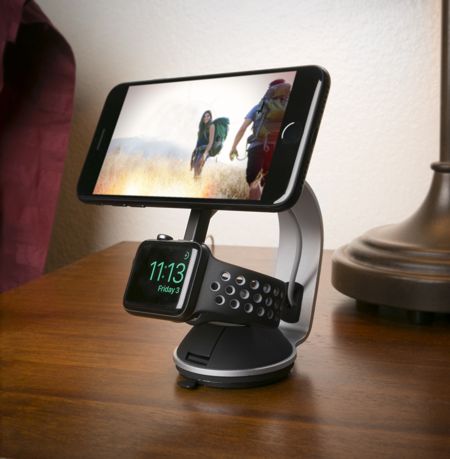 In other words, you would end up with a wholesome, tangle-free system for mounting devices that will kiss goodbye to a tangled mess be it at home, the office or while you are on the road. The versatile MagicMount Pro Office/Home makes use of the company’s award-winning MagicMount technology in order to dock a mobile device and Apple Watch to an office desk or kitchen table. It will rely on the StickGrip material which securely holds the device, whereas its soft touch, rubber lock-nut delivers secure positioning with a four-axis adjustable angle in order to comfortably read notes in portrait or landscape modes. The open design ensures that access to controls and ports remains unblocked, and it will ship alongside a large and small MagicPlate metal plate for mounting purposes. Expect the MagicMount Pro Office/Home to retail for $34.99 a pop.

As for the MagicMount CD, it will let one secure a mobile device to a vehicle’s CD slot. CDs in cars are not too popular these days, so chances are this $19.99 peripheral is not going to sell too many units upon its release. At the very least, it enables drivers to concentrate on the road, where the sleek design allows users to position their screen for optimal viewing and provides a lock-nut for secure positioning.