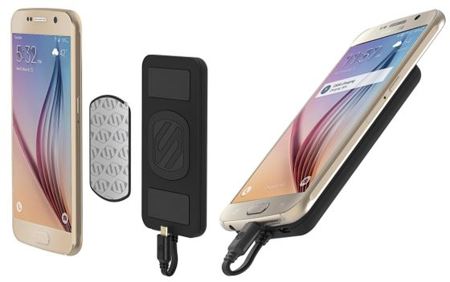 Mention the name Scosche, and chances are you would think of smartphone accessories right off the top of your head. There is wisdom in doing so, especially when you take into consideration the sheer number of accessories that Scosche has come up with in the past, not to mention that these aren’t half baked accessories, but actually carry a practical aspect or side to them. This time around, the folks over at Scosche has decided to cater for travelers who need to make sure that their mobile devices do have a possible back up plan, and this has resulted in the reveal of the all new MagicMount PowerBank.

The Scosche MagicMount PowerBank is a pretty handy companion to have around, as it magnetically attaches to Lightning or micro USB-powered smartphones (or other compatible devices) which will be able to rapidly charge them when users need it most. Not only that, it has a compact design and magnetic capabilities that will make it the ideal portable power solution for commuters, travelers and others who are on the lookout for a sleek, lightweight and slim portable power solution. Looks like power banks do seem to be going in the same direction as that of portable hard drives where they are smaller in size and yet carry more capacity.

The MagicMount PowerBank is living proof that big things arrive in small packages, kicking off with its internal 4000mAh rechargeable lithium-ion battery that is capable of fully charging a dead smartphone, including a iPhone 6/6s or Samsung Galaxy S7/S7 Edge, more than once – we are looking at twice. There is also a built-in 2.1A output that charges such devices in a safe manner and at the fastest rate possible, and the MagicMount PowerBank will arrive pre-charged so that you can enjoy it right out of the box. A quartet of blue LED lights will indicate the current battery power level. Any takers?