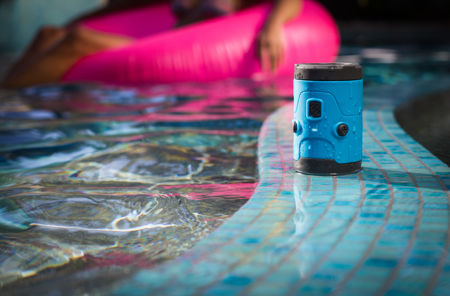 Considering how some modern day smartphones do not only come with high end hardware specifications, they are also rugged enough to be able to withstand the likes of some rain or even getting dunked in water – as long as they do not end up in a pool that is more than a meter deep, and remain there for over 30 minutes, that is. Having said that, what is the point of a pool party if there isn’t some music to keep you and the rest of the folks happy? Why not pair up a waterproof handset with a speaker that is also equally waterproof, all without having to tether them to a wire or cable? This is where Scosche’s boomBOTTLE H2O and boomBOTTLE mini comes in handy, delivering a similar weatherproof capability that is found in the original boomBOTTLE, although arriving in a far more compact and ultra portable configuration this time around.

The boomBOTTLE H2O is a durable, IPX7 rated (waterproof up to 1 meter) device that would find a day out at the pool or at the beach or even on a boat to be what it is meant for. Sporting a 5W 50MM speaker, it has a Bluetooth range of 33 feet, as well as carries more than enough battery life to be able to pump out up to 8 hours of non-stop playback on a single charge. Apart from that, it is made out of floatable material, allowing it to float should it happen to fall overboard.

As for the boomBOTTLE mini, this is a good example of not judging a book by its cover, or in this case, to be more accurate, to reserve judgment against it despite its fairly diminutive size of 2.44” in height. It will make use of a 3W 40mm speaker to deliver rich clear audio, where the IPX4 rated (weatherproof) speaker also has a range of up to 33 feet, where its battery delivers up to 5 hours of non-stop playback on a single full charge.