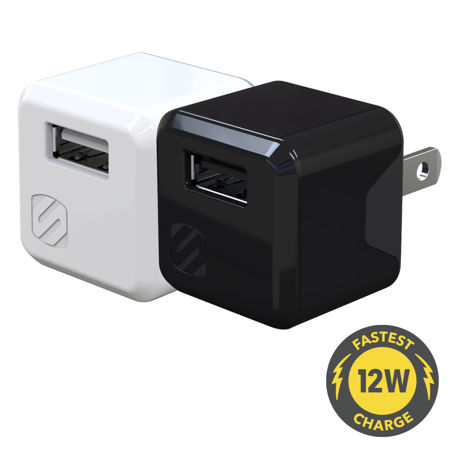 It goes without saying that most of us own a plethora of wall chargers these days – there is no escaping from that fact, considering the number of portable devices that are in our possession. After all, there is one for the smartphone, another for the tablet, oh yeah, how about the notebook? Do not forget about the GPS as well if you are about to venture into unfamiliar territory! Having said that, it would be nice if the chargers that we own at the moment would be able to come in smaller form factors, but this is not the case all the time, although some manufacturers have already done their part to make sure that they squeeze down and miniaturize as much as possible. The superCUBE from Scosche has just been announced, where it claims to be the smallest universal 12W (2.1A) USB wall charger on the market.

The Scosche superCUBE is touted to be 40% smaller compared to the other 12W chargers in the market, and there is also the superCUBE flip that is a wee bit larger, where it features flush folding prongs. Regardless of which particular superCUBE model that you decide to pick up, they will both be iOS and Android compatible, making use of intelligent charging circuitry in order to juice up USB powered devices at the fastest rate possible, without being affected by the make or model, now how about that?

These are true blue clever wall chargers that can immediately recognize the draw and supply the necessary power accordingly, doing all the thinking while epitomizing the drawing power of it being a ‘plug and play’ mobile accessory. Since the Scosche superCUBE is so small, it takes up very little space when plugged in, which would provide easy access to other outlet ports, in addition to making them an ideal travel partner. Both the Scosche superCUBE and superCUBE Flip will retail for $19.99 a pop if you are interested.