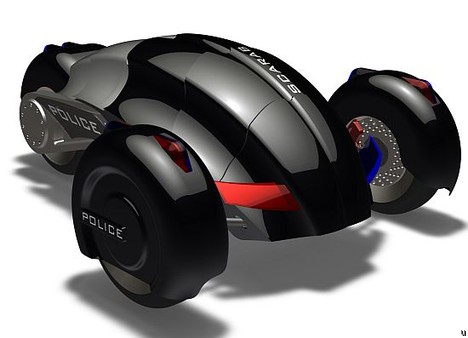 Once again, it would appear that science fiction has somehow turned into fact with the Scarab car.

Basically, the Scarab is a car that is self-driven, like K.I.T.T. from Knight Rider. This self-driving car works a little different than the one from the TV show.

In other words, there is no David Hasselhoff sitting behind the wheel to patrol the streets. The idea behind the Scarab is to to have an officer “tag” a speeding vehicle with a radar gun, and the Scarab then takes over with the chase.

I believe that the purpose of the Scarab is to cut down on officer casualties in high speed police chases. I would have to say that I don’t feel comfortable having a robot car chase a car that could already create casualties. I just don’t think I can trust a robot behind the wheel just yet.

Best of all, this vehicle is designed to be eco-friendly with zero-emissions. It is one hundred percent electric, and I’m guessing it will be charging while it is not pursuing the bad guys.

Now, I have no idea how a Scarab is going to stop a vehicle. The designer, Carl Archambeault, didn’t see fit to put any weapons on it. Then again, do you want a robot vehicle holding weapons?