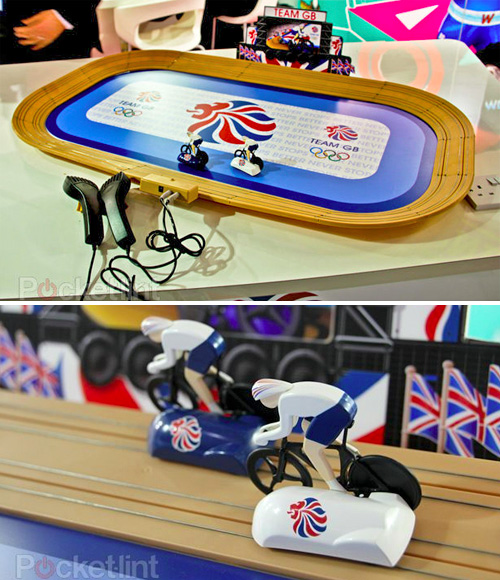 I would imagine that a lot of you remember slot car racing. Normally, it is done with hot tricked-out race cars, but this is done with bicycles.
All of this is a marketing promotion for the 2012 Summer Olympics in London. It is known as a Scalextric Velodrome for cyclists dressed in Great Britain colors.
As you can see from the picture, there are the traditional trigger controls. There are also turns and various lane changing action to make the racing exciting. Absent from the track are loops and other obstacles in the race car tracks, but you have to be realistic about what bikes can do on tracks. This isn’t Speed Racer, after all.
I’m not certain why in the world no one made a slot car game out of bicycles before. I think someone made a slot car race out of Harry Potter’s Quidditch before. Maybe someone should have made a Lance Armstrong racing slot set. It is designed so that he wins the Tour de France several years in a row.
This should be available for about $120 sometime in the summer. I have to admit that I am glad this is being put out a year before the Olympics, even though no one might buy it until Summer of 2012.
Source