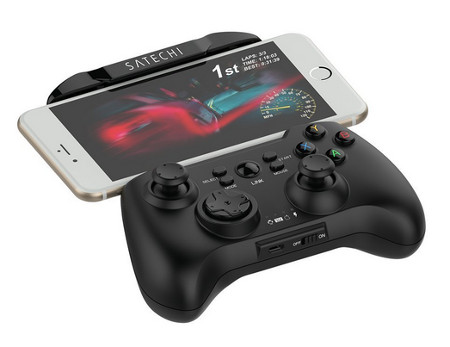 Gaming while one is on the move is nothing new at all in this day and age. After all, we are an extremely mobile society, and just about everyone happens to own a smartphone these days, while some other road warriors happen to be toting around not only a smartphone but a tablet as well – in addition to a myriad of other portable devices that supposedly make life a whole lot easier. The kind of hardware firepower underneath the hood of these portable devices also make them suitable candidates for portable gaming, taking over the role of dedicated portable gaming machines like the Nintendo 3DS range and the Sony PS Vita. Sometimes, however, nothing beats a gaming controller compared to a touchscreen, which is why Satechi is proud to present the new Satechi Wireless Gamepad.

The Satechi Wireless Gamepad is the perfect accessory for smartphone and tablet gamers, where it will play nice with iOS, Android and Windows-powered mobile devices, providing gamers with the kind of traditional gaming experience in which they probably grew up with and crave, all without the hassle of cumbersome or inaccurate touchscreen controls. At least it is compatible with a myriad of mobile operating systems rather than just being limited to one like the Razer Junglecat gamepad.

This is a user-friendly, Bluetooth-enabled Wireless Gamepad that will arrive with a whopping 14 buttons, a pair of joysticks, and a directional pad. The integrated spring holder will ensure that the smartphone will remain on a convenient viewing angle on the gamepad, while your eyes will remain fixed on the game with both hands on the controls. When used as it is, the two features should be able to deliver users with the ultimate gaming experience on any mobile device. The asking price for the Satechi Wireless Gamepad stands at $39.99 a pop.