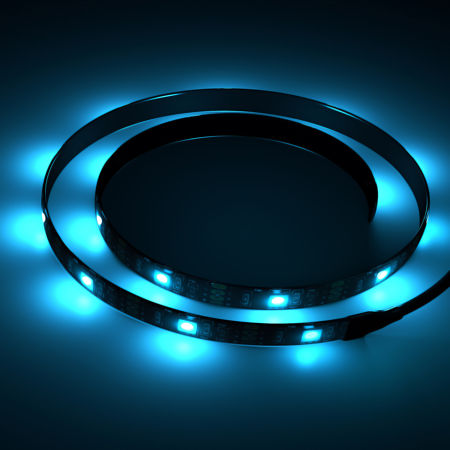 It looks like the folks over at Satechi are pretty fly when it comes to various kinds of accessories for the desktop computer as well as notebooks, and they do not seem to run out of ideas anytime soon, too. Having said that, it must be noted that Satechi themselves have revealed a spanking new USB Light Strip for this coming holiday season, where you will then end up with a slew of colorful customization options – regardless of whether it is in your living room, in gaming spaces, or for the festive holiday period.

The new USB Light Strip from Satechi can be best described as a user-friendly lighting system which will enable users to add a splash of color to any home, office or gaming space. This particular USB-powered light strip has the ability to cycle between a wide array of colors, letting you end up with a custom glow around TVs, computers, windows or other decorative items, where among them include spooky Halloween pumpkins or festive holiday lights, or basically any other kind of unique fixtures which you can think of.

The USB Light Strip is also a snap to work with since it comes with an adhesive backing that would make it easy to apply and re-apply to any surface. I suppose this works only to a certain extent, since the adhesive backing will still pick up dirt along the way, so make sure that you clean whatever surface that you would like to stick it to as thoroughly as possible, although this will only prolong the lifespan of the adhesive backing by some bit – still, that is better than nothing. The strip itself boasts of an integrated in-line remote which would allow users to seamlessly choose between different speeds, brightness, or modes including solid colors, strobes or cycling colors.

As long as you connect the USB Light Strip to any USB outlet, including from a computer, laptop, or any AC to USB adapter such as phone chargers or Satechi’s Compact USB Surge Protector, you’re good to go. Choose from white or black shades for $19.99 a pop.