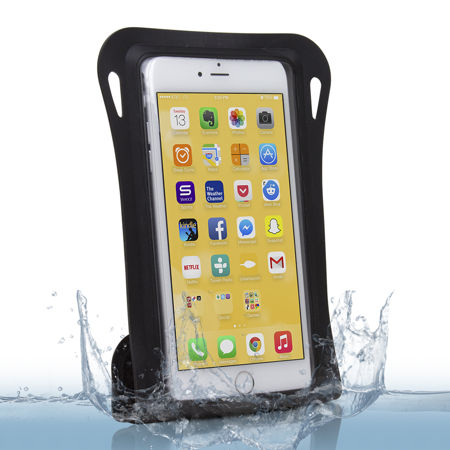 Well, what do we have here? Yet another smartphone case – and I do admit, getting a smartphone case can be an extremely smart move, especially if you have had a history of being the herald of cracked displays due to your fingers mysteriously having lost their grip or control without any prior explanation. Sure, a protective case would definitely cover up all the good work that designers had done with the handset from the drawing board to the manufacturing line, but at least it also offers a degree of protection against nicks and scratches when the inevitable happens, right? Having said that, the GoMate Smartphone Case from Satechi takes things up by a notch, since it was not made specifically for just one smartphone, but rather, will be compatible with smartphones that are up to 5.5” in diagonal length, and that would include the iPhone 6 and Samsung Galaxy S5.

The Satechi GoMate Smartphone Case will also come with an IPX-8 waterproof certification that will deliver protection for your precious smartphone from water damage up to depths of 20 feet, now how about that? This would mean it is ideal for any kind of activity such as hiking, snowboarding, and kayaking, since the waterproof case would be the perfect solution for all things adventure and adrenaline wrecking near bodies of water.

After all, the GoMate Waterproof Smartphone Case does feature a double waterproof seal in order to deliver protection against water, snow, mud, and other debris all the while still letting the user access the handset through the touch-sensitive clear panel. The case itself will also feature a rear-view panel that enables users to snap photos and videos without having to take the device out of the case. Users will not have to leave their smartphones vulnerable to extreme weather conditions just to capture that perfect shot.

Each purchase will come with a lanyard so that it can secure the case around the user’s neck, wrist, belt loop, or cleat during activities. Regardless of whether you are above or below sea level, the lanyard will offer users a hands-free option as you venture into the world of the unknown. The asking price for the GoMate Waterproof Smartphone Case will be $19.99 a pop, as it arrives in black, white, or orange shades.