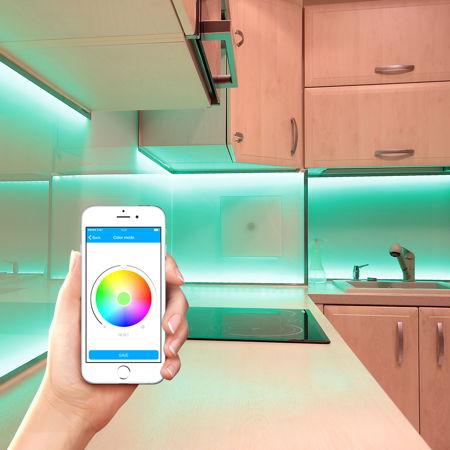 Now here is an interesting thing for your home that you might want to get in order to help you stand out from the rest of the crowd – the Bluetooth 4.0 LED IQ Strip from Satechi. The Satechi Bluetooth 4.0 LED IQ Strip will be part of the cadre that includes the IQ Bulb and IQ Plug, and it joins the ranks of Satechi’s connected home device solutions. The LED IQ Strip is a surefire way of adding a splash of color to any home or office space with ease and convenience, where all that you need to do is to mount the IQ Strip around a TV screen, shelving, mirrors and other places, and voila! You would be able to instantly customize as well as control the colors of up to 10 strips via any iOS or Android smartphone or tablet.

With the free IQ Strip app, one will be able to transform the Strips on and off, dim and brighten them, as well as pick from one of the 16 million color options. Apart from that, you can also change them as desired from the tip of their fingers. The bright blue-white light is useful for studying, while warm yellow lighting facilitates relaxation, while the host of other colors will enable users to express themselves or add a new mood to any room. In Disco Mode, the LED IQ Strip will do its bit to change color in order to match music and sound, making it perfect for parties and entertaining.

Satechi has come up with LED strips in the past, and this means that the LED IQ Strip will stand on the shoulders of giants before it, so to speak. Those who are looking forward to sprucing up their homes with the LED IQ Strip will be able to do so for $39.99 a pop, where you can also download the free app on iTunes and Google Play.