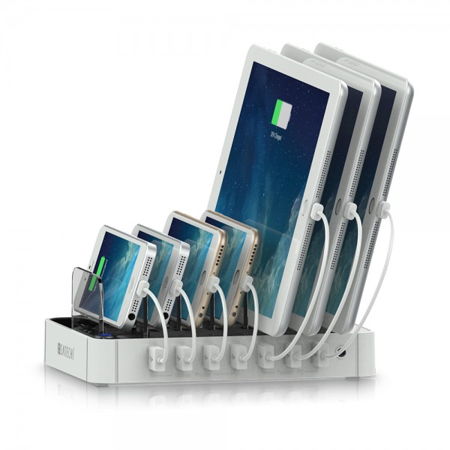 Ah, the wonders of a USB port. Who would have thought that something like this would be able to catch on in such a large manner down the road? Not only that, USB connectivity has more or less become ubiquitous, so much so that to have a device which does not charge up via USB in one way or another would be deemed to be weird. Having said that, while each mobile device does come with its very own charger, it would be better if there was a place where you can juice up several exhausted batteries in one go without having to take up too many power outlets at home. Enter the Satechi 7-Port USB Charging Station Dock, and as its name suggests, this is one bad boy which will be able to power up to 7 different devices simultaneously, now how about that for versatility?

The Satechi 7-Port USB Charging Station Dock would be the perfect solution for users who happen to be in need of a device in order to quickly and efficiently charge multiple smart devices all at the same time, and yet do not want to have the clutter or the mess of wires. It boasts of a trio of 2.4A ports and a quartet of 1A ports, which means this particular dock has the ability to power both Android and iOS smartphones and tablets at the same time.

In other words, it is perfect for any home or office setting, as the 7-Port USB Charging Dock Station boasts of a compact (7.4” x 5.5”), space-saving form factor as part of its effort to reduce clutter and avoid taking up valuable desk and countertop space. Not only that, the user friendly dock will also be able to juice up smartphones and tablets even with their respective protective cases on. All that one needs to do is to hook up the station to a wall outlet, load in up to seven devices, press the power button, and the blue LED light will then let you know that it is powered on, and ready to charge.

Of course, we have seen the likes of the Skiva Octofire USB charger that powers up to 8 devices at once, which means stuff like this $59.99 Satechi offering are a rare breed.