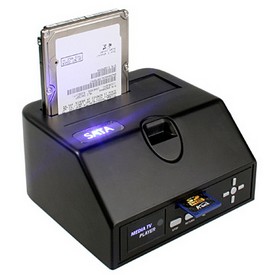 Imagine being able to unplug your hard drive and hook it up to your TV to watch some popular movies or even see some great digital vacation photos sent by Uncle Phil of his recent vacation to Cleveland with the wife and kids. Okay, that would be torture, but being able to enjoy movie downloads or listen to favorite songs while looking at a digital photo album wouldn’t be too bad, would it?

The trouble is, that unless people know a lot about networking and media center TV hacks, the blinking VCR crowd isn’t likely to get it, much less enjoy it. Until now. This SATA HDD Multimedia Dock will plug in not only 2.5/3.5 inch hard disks but also SD Cards. And with its standard RCA or S-Video outputs, users can easily enjoy video, photos and even audio from their TVs without a computer. 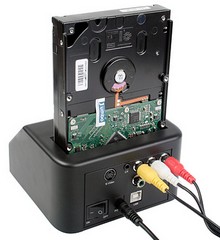 The Multimedia dock also works as a data backup unit as well thanks to its USB interface. This unit presupposes the ability to remove a hard drive and install it into the unit, but if that hard drive is part of an external array, then removal is much simpler, and safer for other data, than removing it from within the computer itself. The only real drawback is that it only works with FAT32 formatted drives but for less than $100, it represents an intriguing option for enjoying PC based media on a TV without hooking up one’s computer.