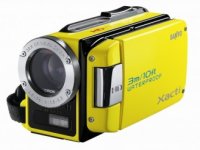 Sanyo is on top of its game yet again by offering a new dual camera range which has certainly blurred the line when it comes to digital still cameras as well as video camcorders, giving users the ability to shoot beautiful stills and record videos of their favorite memories at the same time. While these functions are nothing new when merged into a single device, Sanyo goes a step further by offering full waterproof capability of up to three meters, making their new dual camera device suitable for folks who love to go snorkeling or spend plenty of time by the water, be it by the beach or at the stream. One would expect these will be pretty pricey in nature, but Sanyo has reassured consumers that these will not burn the pocket linings but instead be actually affordable to the masses – a moot point during the current global financial crisis.

The two new waterproof dual camera models are known as the VPC-CA9EX and VPC-WH1EX. Both of them can record underwater, although the former is able to do so only up to a depth of 1.5m while the latter is able to double the amount to 3m, with a restriction of 60 minutes thereabouts. We’re not sure whether that is due to the memory/battery limitation or the physical design – if it is the latter, we suppose the waterproofing isn’t done too well and hence its inability to swim with you for too long. Still, either one is perfect for those who want to shoot a mini-documentary or capture beautiful stills of our pristine underwater life (or whatever’s left of it).

Features found on both models include high definition recording for clearer and crisper images. The VPC-WH1EX comes with a stunning 30x zoom, making it the largest zoom of any waterproof camera in the world at press time. It is interesting that you can record video while capturing stills simultaneously at the press of a button, making sure you do not miss a single moment no matter where you are. Memory is flash based for enhanced battery life and it makes the device more compact and lightweight.