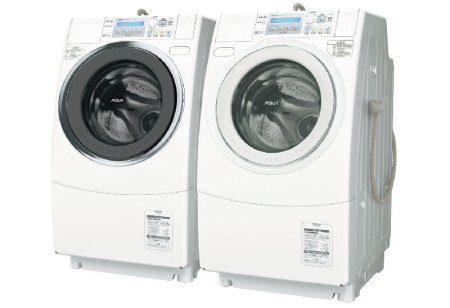 Sanyo does not only make great rechargeable batteries in the form of Eneloop, they are also environmentally conscious with their new range of AWD-AQ4000 drum type washing and drying machines known as Aqua. These new versions comes with a built-in ozone (O3) generator, which helps increase the amount of ozone generated to double that of its current product, the AWD-AQ3000. In addition, during the rinsing process for washing out detergent and dirt, Sanyo decided to change it by replacing one of the two rinsing cycles which use water pooled within the tub with a “high-speed shower rinse,” where the laundry is rinsed with a shower of water instead. Sanyo hopes that by introducing these improvements, the amount of water used will be decreased by approximately 10% (which is roughly 68 liters in a 9kg laundry wash, while reducing washing time to 34% despite maintaining washing performance that is equal to the current product.

Not only that, Sanyo’s new Aqua range will also increase the output of the O3 generator from 285ppm to 600ppm. Its predecessor had circular generating elements which were laid out on a plain surface, whereas the new generator features linear electrodes located within the center of a cylindrical glass tube. This helps make ozone get generated more effectively thanks to the entire glass tube as linear electrodes are able to discharge electricity toward the wall of the tube while air is sent into the glass tube.

What’s more, power consumption was reduced to approximately 6Wh – which is roughly a 33% reduction compared to the current product. For those who want to save money while doing their house chores in these times of economic hardship, you’ll be pleased to know that Sanyo’s AWD-AQ4000 is able to reduce electricity cost from approximately $0.14 to just $0.03 in a 60-minute course of “air wash” which sterilizes and deodorizes your clothes using O3.