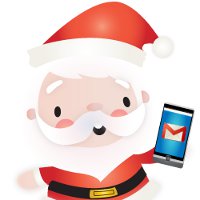 Do you have a Google Voice number? If you have answered in the affirmative, guess who else is deemed on the ‘nice’ list to own his very own Google Voice number? It seems that Santa, the most popular imaginary resident at the North Pole, has gotten his very own Google Voice number as well. In fact, Santa received his number last year, where folks living in the US were able to be on the receiving end of a special personalized holiday phone call from the man himself. What about this year – what else would be different?
For 2011, Santa wants you to do it the other way around – by calling him. I suppose he must have gotten all lonely at the North Pole, never mind that he has elves to help him out with all those present wrapping, in addition to his son who starred in the movie ‘Arthur Christmas’, and his merry bunch of reindeer aren’t exactly the best conversationalists to begin with. For those of us out there who have a special request for Santa, you can always call him from Gmail – just bear in mind that this call is free for those living in the US and Canada, as for folks who reside outside of the two mentioned countries, it will cost you $0.01 per minute in addition to any applicable taxes.

Just what is Santa’s Google Voice number? It is pretty easy to remember – just dial 855-34-SANTA, and you’re good to go. Since Santa is such a busy bee, he will be unable to return the messages himself, but he does promise to keep everyone updated on the latest happenings at the North Pole without requiring you to tune in to CNN, BBC or any of the other major news networks.
Apart from that, you are able to conjure up your very own unique, customized phone call from Santa to anyone else who is in your ‘nice’ list, ranging from your nieces and nephews to old college friends, over the phone – again, this is applicable to US numbers only. If you want to listen to a sample phone call, you can always send a message of your own from SendaCallFromSanta.com.
Apart from taking advantage of this particular service, just wait until it is closer to Christmas and check out what Santa has in his bag of goodies to do his bit in spreading some extra holiday cheer.
Press Release