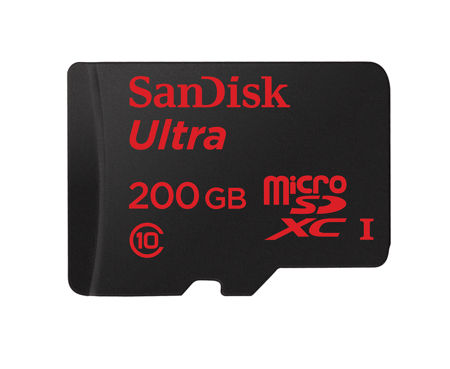 Where the tech geek is concerned, one can never have enough memory – and this is why we continue to see leaps and bounds happen in the world of personal storage. More than a decade ago, if you were to carry a 128MB USB flash drive, that would be a real big deal. Today, we are no longer dealing with MBs, but rather, GBs. Having said that, Android-powered smartphone owners would most probably be able to identify with the presence of a microSD memory card in their respective handsets, not to mention having to sort out the various photos, videos and other media files from time to time, simply because said microSD card has run out of space. Well, if you have a little bit of extra cash to spare, you might want to take time to check out SanDisk’s latest achievement – the 200GB SanDisk Ultra microSDXC UHS-I card Premium Edition.

Yes, you can tell by its name alone, that this delivers an unprecedented level of storage space for your mobile devices – smartphones or tablets, it does not matter, as long as those devices happen to come with a compatible microSD memory card slot. Just what can you do with 200GB worth of storage space, all crammed onto something so small that it is roughly the same size as that of your fingernail? Well, we are looking at 20 hours of Full HD video, now how about that?

The 200GB SanDisk Ultra microSDXC UHS-I card Premium Edition is able to be realized thanks to the lessons learned and applied after rolling out its predecessor, the 128GB SanDisk Ultra microSDXC card in the previous year. Storage capacity has been increased by 56% within the same fingernail-sized form factor, where you no longer need to worry about storage limitations.

With such a large amount of storage space, data transfer speed is important as well, and thisPremium Edition microSD card does not disappoint as it offers transfer speeds of up to 90MB/s. Expect the 200GB SanDisk Ultra microSDXC UHS-I card Premium Edition to retail for $399.99 each later this Q2.