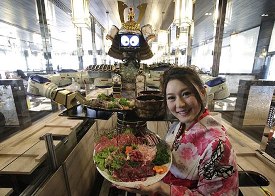 Okay, I’ve already talked about PR2, a laundry folding robot, and now I’d like to talk about a robot that can do tasks that humans would not want to do, like serve food.

These are the robots of the Hajime restaurant in Thailand. The owner, Lapassarad Thanaphant, decided that she wanted a Japanese restaurant, and instead of hiring a wait-staff, she set her place up for samurai robots.

That’s right, robot samurai, and not like the robot samurai like the ones in Robocop 3. No, these robot samurai are very cute with their big round eyes. Not only do they deliver the food and clear it, but they can also do this little dance. You can watch a video of them after the jump with some music from the east and the west.

The owner of the restaurant spent about $930,000.00 to get this restaurant going, and I have no idea how much independent function that these samurai robots have. In other words, does she have to push some buttons to make the robots drop off or fetch the food, or do they figure it out by themselves?

If this works, then I think there needs to be other robot-themed restaurants. For example, what if there was one with Terminators instead of robotic Samaurai. It could be called Terminator: Salivation. Get it? Because the food is so good that it makes your mouth water, or salivation. It’s not funny if I have to explain it, right?