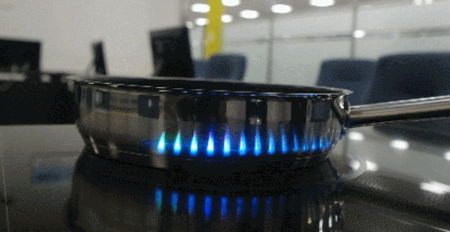 An induction cooktop has its fair share of advantages – it does not require any kind of gas to run, which means the risk of an explosion is reduced, and neither do you have to worry about the traditional risks of an open flame. However, there are always two sides to a coin, and some dishes, such as those which require a strong flame from various Chinese wok recipes, would fare better on a gas stove than an induction cooktop. In fact, one major drawback of an induction cooktop would be the inability for users to ‘see’ if it is heating properly. Sure, users are able to fiddle around with the buttons on the stove in order to control the heat level, which is more than convenient, but it is not really possible to observe or feel it. Samsung intends to change all of that by offering their Virtual Flame Technology, which will mimic the kind of visual feedback that gas stove flames give, as part of an alternative to deliver an intuitive display of the level of heat.

The Samsung Chef Collection Slide-In Range with Virtual Flame Technology was originally released Stateside in June last year, where throwing in an analogue ‘sense of warmth’ to a digital induction cooktop is one of the surefire ways of attracting customers.

Virtual Flame Technology shows off its presence through the casting of flame-like glows onto pots and pans whenever they are in use. The moment the heat level goes up, the image of flames will gradually grow bigger and brighter, which inadvertently provides the feeling of using the familiar gas stove. In other words, these virtual flames will be a reflection, “projected” on the side of the pot or pan, of an LED (light emitting diode) lighting that has been specially embedded in the cooktop’s surface.

Sounds pretty simple in theory, but in reality, it is quite a challenge to find LEDs that can withstand high temperatures in a short matter of time from room temperature, but now that Samsung’s done it, I am quite sure others in the industry will find ways to follow suit.