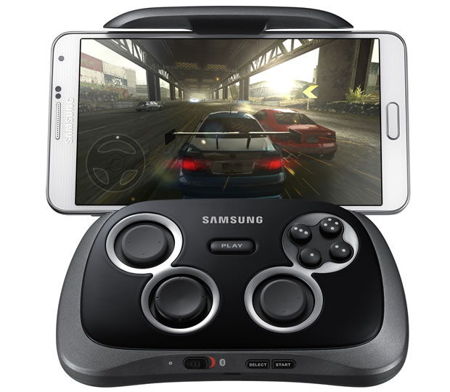 With Samsung being a major player in the world of smartphones, having rolled out devices that will cater not only from the entry level to the mid-range and all the way to the high end, it would also make plenty of financial sense if they were to also carve a niche for themselves in the seemingly highly lucrative accessories market. After all, every smartphone needs a decent sleeve of sorts to make sure that it does not get scratched or dirtied unnecessarily, right? Well, Samsung might be on to something here with the introduction of a new controller that they have called the GamePad.

I know, I know, the name itself sounds all too simple actually. A GamePad, really? That’s so generic, you might as well release a brand of toothpaste that is called, well, Toothpaste. Having said that, the Samsung GamePad will come in the form of a steel-framed controller, where it will grasp your smartphone with an unerring grip while your thumbs and fingers will be able to get a classic gamepad workout as you play with your favorite games on your smartphone. The GamePad is flexible enough to be compatible with Android-powered devices that will range anywhere from 4” to 6.3” in screen size, making it ideal for smartphones as well as some phablets.

As for compatibility, the Samsung GamePad will play nice with any Android-powered device, as long as said device will run on Android 4.1 Jelly Bean or higher. Samsung did mention, however, that the GamePad has been specially optimized for Galaxy devices that will feature Android 4.3 Jelly Bean or higher, where among them include the Galaxy S4 and S3 and the Note 3 and 2. I guess those newer devices with NFC pairing makes life a whole lot easier and less complicated. There is also a Play button which will launch Samsung’s Mobile Console app that allows folks to browse and buy games supported by the GamePad. How is that for a hassle-free accessory?