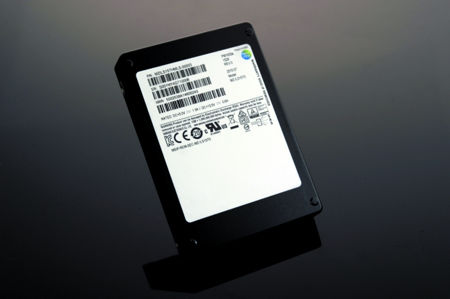 Samsung has definitely set a new record (yet again), and this time around, it has nothing at all to do with smartphones, but rather, it has everything to do with the world of computers and notebooks, with storage in particular. Basically, Samsung has announced that they have begun to ship the industry’s largest solid state drive (SSD), which carries the model number “PM1633a,” and as to the amount of data in which it is able to bring around? We are talking about a whopping 15.36TB, now how about that for impressive?

This monster of a SSD was first revealed at the 2015 Flash Memory Summit in August, where the 15.36TB SSD is based on a 12Gb/s Serial Attached SCSI (SAS) interface. Needless to say, this kind of storage space and technology would be for enterprise storage systems, although we would not rule out anyone who is rich enough and a technophile to be willing to splurge on one of these for their home systems. As the PM1633a arrives in a 2.5-inch form factor, enterprise storage managers should find it a snap to fit twice as many of the drives in a standard 19-inch, 2U rack, as opposed to an equivalent 3.5-inch storage drive.

15.36TB of data storage on a single SSD is definitely an unprecedented event, and how is this made possible? Through the merging of 512 of Samsung’s 256Gb V-NAND memory chips. The 256Gb dies are stacked in 16 layers in order to form a single 512GB package, where one ends up with a total of 32 NAND flash packages within the 15.36TB drive. Making use of Samsung’s 3rd generation, 256-gigabit (Gb) V-NAND technology that stacks cell-arrays in 48 layers, the PM1633a line-up will be able to deliver significant performance and reliability upgrades from its predecessor, the PM1633, where that model made use of Samsung’s 2nd generation, 32-layer, 128Gb V-NAND memory.