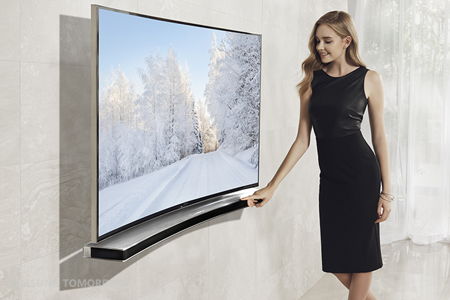 Samsung has rolled out its fair share of consumer electronics devices to date, ranging from home appliances to smartphones and wearable technology and some great universal remotes. This time around, it would be a particular device that is slightly off the beaten track, so to speak, as it comes in the form of Samsung’s HW-H7500/H7501. The Samsung HW-H7500/H7501 happens to be the world’s first TV-matching curved soundbar, where it will be released at IFA 2014 in Berlin, Germany, next week.

Taking into consideration that this is the first TV-matching curved soundbar in the world that was specially designed to play nice with Samsung’s very own collection of curved TVs, your ears will definitely be more than happy to enjoy the powerful sound options that are on the table.

Those who are interested in picking up one of these puppies will be able to do so as a stand or mounted type for wall-mounted TV with the 55” and 65” Samsung Curved UHD TVs, and it will definitely go some way in complementing the aesthetic design of the TV. The Curved Soundbar is also said to be perfect for wall-mounting, since one will be able to install it in a jiffy under the TV which functions as a replacement TV stand, all without having to drill different kinds of holes into the wall. There is also enough space for any other device you might want to install, including an android TV box.

The Curved Soundbar will boast of a slim width of 42mm as well as a curvature radius of 4,200 mm, which is the similar kind of curvature that can be found on the Samsung Curved UHD TVs, where it delivers a greater sense of curve by surrounding the viewer and providing an extremely powerful listening experience. The Curved Soundbar would be a natural evolution of premium design, where it has been specially crafted with a finely brushed aluminum finish which will highlight Samsung’s unique premium identity as it perfectly matches Samsung’s 55″ and 65″ Curved TVs.

There is also 8.1 channel support, where a couple of speaker units have been added on the both of sides so that it can deliver sound from three directions, resulting in more spatial and overwhelming surround sound. Samsung’s proprietary technology will also offer a more detailed sound, complete with amped up mid and low-range capabilities for improved fidelity and minimized sound distortion. Such features can be easily controlled via Samsung TV remote controls as one connects the Soundbar to the Samsung TV wirelessly via “TV SoundConnect.” I suppose pricing and local availability details will be revealed at IFA 2014.