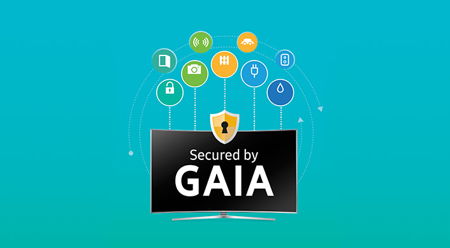 Samsung is well known for rolling out a slew of consumer electronics devices over the years, and you can be darned sure that they are not going to stop anytime soon. In fact, with CES 2016 set to happen in just a few days’ time, the folks over at Samsung will surely have their hands full when it comes to preparing themselves for a product range rollout. Here we have Samsung Electronics making an announcement of GAIA, which is a powerful and comprehensive three-layer security solution for its entire 2016 line up of Tizen-based Smart TVs. This particular service will ensure that consumers remain protected across all areas of the Smart TV ecosystem, and this will include the likes of services, software and hardware security.

Hyun Suk Kim, President of Visual Display Business at Samsung Electronics, shared, “Protecting consumers’ personal information is of the utmost importance to Samsung, both in terms of the company’s values and what’s needed for the continued growth and success of the IoT ecosystem. GAIA is a security solution that will give Samsung customers security and peace of mind now and in the future.”

GAIA will offer protection for consumer’s personal data in three ways – Secure Zone would be the first, as it is a virtual barrier that conjures a secure space while protecting the core service operations. There will also be a Secure Keypad/Number Pad, where this virtual data input mechanism is seen on a TV, and it is used to safeguard consumers’ personal information such as credit card and password.

Apart from that, GAIA will encrypt important data that is transmitted between the TV and IoT service servers. GAIA’s integrated anti-malware system detects and blocks any unauthorized programs which could be used for hacking from running or making changes to key part of the Smart TV’s OS.

Last but not least, the security level is also strengthened in terms of hardware, as Tizen OS is divided into a couple of parts – the main and the security space, letting data for each space to be secured separately. It looks like 2016 is set to be an exciting year for those who want a Samsung Smart TV!