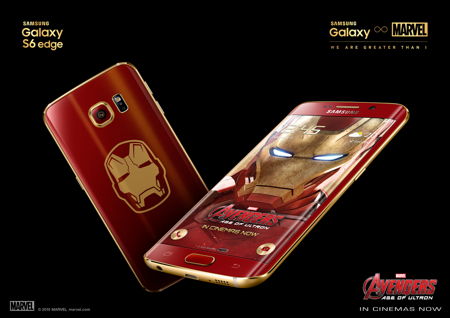 It was in March this year that we hailed a new era of flagship smartphones with the release of the new Samsung Galaxy S6 as well as the Samsung Galaxy S6 edge. It has been barely two months since, and it looks as though there is a little bit of a surprise for folks who are thinking about picking up the latter, but for one reason or another, have not done so yet. If you feel like you do not have enough of the Avengers as well as its sequel that is tearing up box office records everywhere, then you would be pleased as punch to hear that Samsung has just revealed the Galaxy S6 edge Iron Man Limited Edition. Needless to say, this particular smartphone was developed in collaboration with Marvel.

This particular alliance between Samsung and Marvel would be to celebrate the technological innovation and creative visual storytelling found in Marvel’s Avengers: Age of Ultron, and hence, just to be loud in nature, it goes along very well with the Iron Man persona, where charismatic billionaire Tony Stark lies under the suit of armor.

Everything else in terms of hardware will remain the same in the Samsung Galaxy S6 edge Iron Man Limited Edition, although you will find the external design and prints to be one that is a surefire method of attracting attention. After all, you end up with the 64GB model (no 128GB model it seems), where there is an Arc Reactor wireless charger bundled along as well as a clear cover that enhances the device’s exclusive design, now how about that? Surely this is as good as it gets to being an Avenger. Those who are interested can pick up the Galaxy S6 edge Iron Man Limited Edition in Korea from today onward, while folks living in China and Hong Kong will have to wait until next month. There is no word on pricing though.