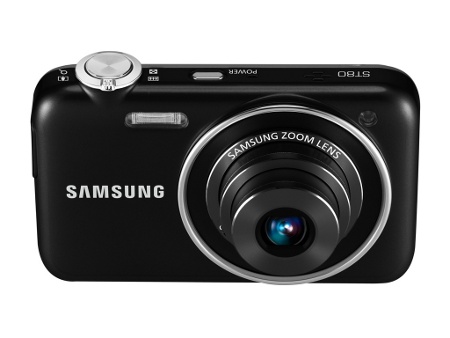 Samsung jumps aboard the Wi-Fi enabled digital camera bandwagon with yet another model, this time round the ST80 will take center stage. After all, this 14.2-megapixel point-and-shoot camera will also feature Samsung’s AllShare (DNLA) connectivity, making it a snap for the ST80 to share images wherever you are sans wires, while keeping family and friends updated on your status from anywhere at any time. Not only does the Samsung ST80 have brains, it also has plenty of brawn, being a sexy little device to boot thanks to its unique styling which makes it stand out from the crowd. Featuring a slim and rounded design, the ST80’s chassis will hold a 3x optical zoom as well as a large, 3″ wide touchscreen display located behind.

Some of the smart features available on the ST80 would be the ‘Smart Crop’, which in essence is a unique editing tool that will not require you to toy around with your captured digital images on a computer. After all, you can do so directly on the camera itself, cropping images taken at any angle or slant, including banners or signs, followed by straightening them out as though you had taken them straight on in the first place. We’re guessing even trained eyes will have a hard time telling the difference. With Samsung’s Smart Auto (Still & Movie) scene recognition technology, capturing images become easier than ever, recognizing the user’s current shooting environment automatically while choosing the right settings in order to achieve picture perfect moments.

Still photos are not the only thing the ST80 is good at, as it also boasts HD video recording for those who are interested. At 30 frames-per-second, the ST80 is more than capable of letting you record high-quality, 720p HD video using the H.264 format, gaining up to thrice the recording capacity compared to the MJPEG video format. With its Wi-Fi connectivity, you can upload or share digital images or videos with others straight from the camera without uploading it via a cable beforehand. Not only that, direct uploading to social networking sites such as Facebook, Picasa, YouTube, Photo Bucket and Samsung’s own Web site is also possible. The Samsung ST80 will be out this September for $249.99 a pop.