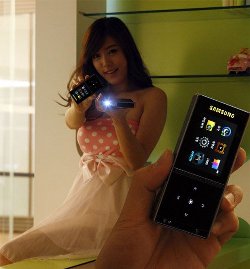 I believe that I saw several mini projectors at CES. I remember visiting Samsung’s booth, but I don’t remember seeing the MBP200 pico projector. My sources say that it was announced back then, but I must have missed the press conference.

Specs on the Samsung MBP200 have recently been released. It comes with HVGA resolution of 480 x 320, but I’m not certain what that equals in terms of the size of the projected image. I’m surprised that I didn’t see that in the specs at all.

As for memory, I’m not certain how much internal memory here is in this device. I do know that it has a microSD slot to support cards for 16GB. Anyone know how much that translates to as far as actual video footage?

The Samsung MBP200 will be available in May, but the price will be around $637. It will be only available in European markets, with no word of it coming overseas to the States.

So, is this the beginning of the mini-projector boom? We will see.