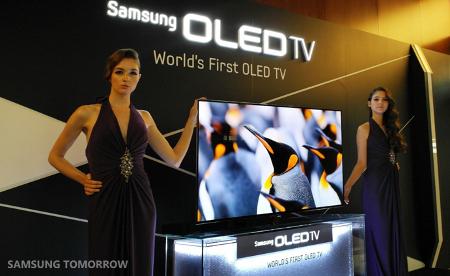 The 2012 Samsung Premium TV Showcase saw Samsung Electronics unveil what is deemed as the world’s first large-screen OLED TV, which has been made ready for mass production. Also known as the model number ES9500, the Samsung ES9500 OLED TV is said to deliver unprecedented picture quality, a wide range of Smart Content (the kind you usually only get with a TV streaming box), and premium design that marks a spanking a new era in history where Samsung and the TV industry are concerned. Not only that, this new new OLED TV from Samsung is already an award winner, having picked up the Best of Innovations Award Honoree gong at CES 2012 which happened in Las Vegas, Nevada, earlier this January.

What makes Samsung’s new OLED TV so special from the rest? Well, it is said to be comprised of self-emitting light sub-pixels, where all of them can be adjusted individually via your standard or universal remote control. Due to this nature, the technology in action will be able to differentiate between degrees of blacks, and in theory, enables its unlimited contrast ratio to deliver unparalleled detail – blacker blacks, as marketing phrases and terms like to put it in. The ES9500’s self-emitting sub-pixels can also individually reproduce life-like colors which are said to be rated as 20% richer compared to those found on LED TVs.

Not only that, Samsung’s ES9500 OLED TV will not require a separate light source, resulting in it delivering fast response times, doing away with motion blur even in the fastest-moving scenes including action-packed movies and sporting events. Since it has a very high response rate, this also paves the way for the OLED TV to offer life-like 3D experiences without any crosstalk happening at all.

In addition to the above, Samsung also has introduced a new Dual View feature that allows a couple of people to check out two channels simultaneously on a full display. This is possible in this day and age simple because the viewing real estate is a whole lot larger compared to the 20″ TVs that our parents and grandparents used to watch, and even so those are fat, chunky CRTs.