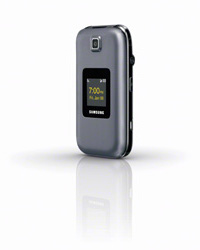 Most of us are so caught up with smartphones as well as the kind of entertainment it delivers to the table, that we tend to forget that there is still a segment of folks out there who cannot afford phones that cost a few hundred dollars, leaving them with choices that are narrowed down to regular feature phones. Well, having a feature phone is not all that bad, really, considering how handsets from this particular group tend to be a whole lot hardier than a smartphone. Ever owned a Nokia 3310? Yeah, that candybar handset was the bomb when it came to durability of a normal phone, barring those rugged handsets from the likes of Sonim. Well, Sprint has another standard feature phone for the masses, where it is known as the Samsung M370.

Specially designed for practical customers who want to use the phone just to make and receive phone calls, snap photos once in a while, and send and receive text messages, the clamshell Samsung M370 does seem to be the perfect purchase. After all, it does come with decent enough looks, and will even sport Bluetooth connectivity for hands-free conversations. Of course, if you do not own a Bluetooth headset, all is not lost, since the M370 will also sport a built-in speakerphone. Nice to know that threaded text messaging is included with the M370, as it makes keeping track of your text messages with a particular person a whole lot easier, without having to go through an extremely long list of scrolling down to get an idea of where the conversation left off.
Apart from that, built-in productivity tools comprise of a calculator, calendar and task list. There is also a customizable photo caller ID, while speaker-independent voice dialing also helps out when you are too occupied with both of your hands. There is also a built-in parental control setting that will restrict incoming and/or outgoing direct dial calls as well as limit access to data services. If you have concerns about getting lost, Sprint Family Locator works great by relying on GPS technology to locate your child’s phone and display the location on an interactive map. To top it all off, there is a 3.5mm universal jack which works great with majority of earphones out there, a 1.3-megapixel camera, 128MB RAM, 256MB ROM, and 2MB of internal storage space. The display is a 2.4″ LCD QVGA resolution screen, while the battery measures at 1000mAh. You can only pick it up in one color – Pewter Gray.
Product Page