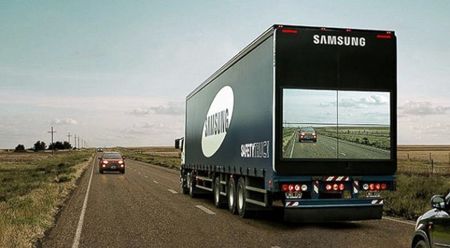 We saw how Samsung unveiled their very first Mirror and Transparent OLED dislpay panels not too long ago, which were certainly technological marvels in their very own right. Well, it looks like the folks over at Samsung are pretty serious with their display technology, and will continue to find different methods and ways to ensure that they can implement such technologies into our everyday life in order to make it more convenient and ultimately, safer. Case in point, when you are driving on the road. Having the engine purr as you step on the accelerator down a freeway is a great feeling, but not when you are stuck behind a truck on a two lane road with two way traffic. Samsung hopes to reduce the dangers of overtaking a long truck with a rather radical solution – by having the back of the truck display video feedback of what the truck driver sees.

In other words, you will be able to see what is going on further up in front, thanks to a wireless camera that is located in front, in addition to a quartet of outdoor rear monitors that can project traffic conditions for both truck driver as well as trailing drivers. Known as the Samsung Safety Truck, this particular concept would transform the traditional idea of the long-distance truck, where such technology would definitely go a long way (pun intended) in aiding both truck drivers and trailing traffic.

In other words, the truck driver will not have his or her view obstructed, while drivers behind will be able to check out just what is beside or ahead of the driver – in order to make quick decisions without endangering the life and safety of anyone else. Interestingly enough, a night mode is also throw into the mix, letting the trailing drivers perform an overtaking maneuver in a safe manner. It definitely feels as though this has been a long time in coming…