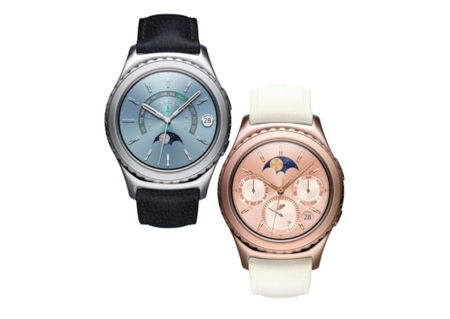 When you were growing up, all that you saw in glossy magazine covers were images of successful men and women, and they happened to be dressed immaculately as well, with nary a strand of hair out of place. Well, most of the time they also wore watches that say who they are, and the names are notable luxury brands ranging from Rolex to Piaget and the like. Well, times have definitely changed since then, and a watch is a whole lot more than a time telling device, as evident by the advent of the smartwatch with the Samsung Gear S2 being released late last year. Well, the folks over at Samsung intend to make the Samsung Gear S2 better with several updates of their own.

Samsung has taken the liberty to reintroduce the Gear S2 classic, where it will take the intuitive, award-winning design of the Gear S2 while upping the ante by throwing in more high-end materials into the mix, having it arrive in not one, but two unique finishes. These new options are said to offer users with diverse choices in order to express and match their style, where there is an expanded app ecosystem and new mobile payment features which further enhance the device’s functionality.

There will also be straps that hail from Colombo via della Spiga, the iconic brand expert in leather processing since 1955. These straps are said to be crafted in crocodile leather, which a classic of Colombo, and will be completely handmade by skilled artisans. Samsung Pay has also been integrated into the Gear S2 classic and Gear S2, letting you make use of NFC to perform safe payments just about anywhere that supports it from your wrist itself, now how about that for added convenience?