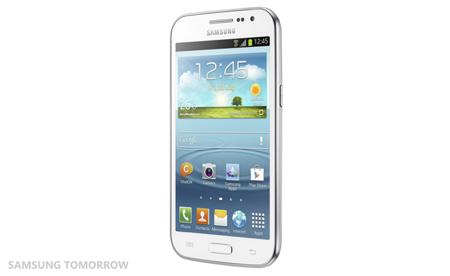 Samsung is certainly a company that does not want to remain too specialized in their offerings to the masses. For example, they do want to do their level best to cater across a wide range of users when it comes to their smartphone range, which explains why they have entry level models, mid-range devices, and of course, flagship models that will send the world to a standstill whenever there is an impending announcement. Not only that, Samsung does deliver smartphones in all shapes and sizes, but it seems that they are placing more emphasis on the phablet segment this time around, with the announcement of the new Samsung Galaxy Win.

The Samsung Galaxy Win is said to be an intuitive new smartphone which was specially designed to balance the needs of the on-the-go user, where it is accompanied by massive processing power, the ability to perform multitasking, all crammed into a 4.7” design that would certainly leave some quarters wondering whether they should pick up the Samsung Galaxy Note 2 instead.

As for its hardware specifications, the Samsung Galaxy Win will run on a quad-core 1.2GHz processor, sport a 4.7” WVGA TFT display, with a 5-megapixel camera at the back alongside a VGA camera in front, where the rear camera boasts of capabilities like Continuous Shot, Best Photo, and multiple color effects that allows you to capture high-quality photos in a fun and easy manner. Not only that, it is accompanied by 1GB RAM, 8GB of internal memory, and just in case that is not enough, you can always further augment it by throwing in a microSD memory card to boot.

You will be able to choose from two colors when the Samsung Galaxy Win arrives in its respective markets, with Ceramic White and Titan Gray to pick, while a couple of variants are also at your disposal, where you will have to select between single SIM or dual SIM.