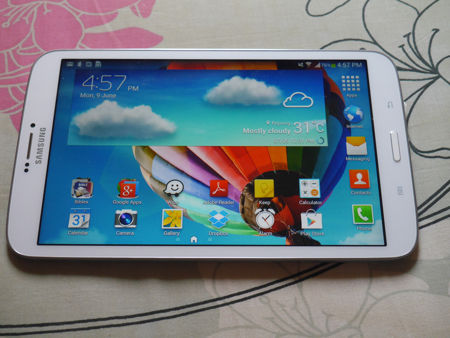 When it comes to tablets, Samsung is pretty adept at churning out a little bit of something for everyone, ranging from the high end side of things with the Galaxy Tab Pro in recent times which target professionals who have deep pockets, while the more common man will have to settle for something more “normal”, such as the Galaxy Tab range. We have recently picked up the Samsung Galaxy Tab 3 8.0 with LTE connectivity, and after spending some time with it, here are our thoughts.

Hardware Design And Specifications
The Samsung Galaxy Tab 3 8.0 with LTE sports a new 8” panel that first debuted in the Galaxy Note 8.0 that appeared some time ago, although Samsung’s engineers have managed to send it to the fat house by reducing its profile to a slimmer 7.3mm, with the device tipping the scales at 330 grams thereabouts. There is a hyperglaze coating at the back which is a surefire way to attract fingerprints, but I guess having fingerprints appear all over your mobile device in this day and age is not a big deal at all.

A 1.5GHz Samsung Exynos 4212 processor runs right at the heart of the Galaxy Tab 3 8.0 with LTE, where it is accompanied by 16GB of internal memory, 1.5GB RAM, an 8” display at 1,280 x 800 (WXGA) resolution, with a 5MP shooter at the back alongside a 1.3MP camera in front, Wi-Fi connectivity, Bluetooth 4.0 support, support for LTE/HSPA/GSM bands, a 4,450mAh battery alongside Android 4.2.2 Jelly Bean as the operating system of choice. No, there is still no KitKat update available for the Galaxy Tab 3 8.0 with LTE just yet.

The 5MP camera at the back does lack a LED flash, so you would be unable to capture photos under low light conditions. Even in a room with standard lighting, the camera does take some time to focus on the object before it shoots, and I would not use the camera at all as my primary photo capture device, instead relying on the average smartphone’s camera which is a whole lot more responsive and capable.

Oh yeah, I am quite sure that 16GB of internal memory is not going to be enough these days even for the average user to get started with, which is why it makes perfect sense to make full use of the SD memory card slot, where one would get an SD card right out of the box to get you started.

Software
You will find the standard issue bloatware arrive alongside this particular model, which is not to be anything that one ought to be too concerned with, especially if you are a beginner to the Android tablet universe. A version of TouchWiz is prevalent, although features like Air View, Air Gestures, Smart Pause, Eye Scrolling and S-Health are not part of the equation. So far, I have installed the “usual suspects” as I like to call them on the SM-T315 (as it is known by its model number) such as WhatsApp, Skype, Viber, Google Drive, Adobe Reader, and The Simpson’s Tapped Out among other Google services. Other than that, everything else remained the same. Performance for ordinary apps run pretty decently, and there was not lag whatsoever whenever I switched from screen to screen.

As mentioned earlier, the camera is not something that you would use unless you really have no other options in the vicinity. It does, however, come with half a dozen shooting modes – Auto, Beauty Face, Sound and Shot, Panaroma, Sports and Night.

As a multimedia device, the Samsung SM-T315 works just fine if you are the average Joe who simply wants a tablet that “works”. It sports a decent size that is not too hard on your hands, and with Dolby surround stereo speakers, it gets the job done whenever you view movies or listen to your favorite songs on it. Playing back your music on the SM-T315 would not be too different an experience from that of other more recently introduced Galaxy devices.

Performance
I would recommend coughing up a little bit more dough to pick up the Samsung TM-315 with LTE compared to the Wi-Fi only model, as you can never quite tell just when your smartphone might have “died”, and you need to have a temporary replacement. Well, with LTE capability, it ought not to be an issue whenever there is no Wi-Fi network in the vicinity.

Call quality on the SM-T315 is pretty decent, sounding just like how your smartphone would in the same area. I would recommend using a Bluetooth headset or a standard hands-free kit to go along with this puppy, since holding up an 8” device does not make much sense at all, not to mention it makes you look weird. Really weird in public. 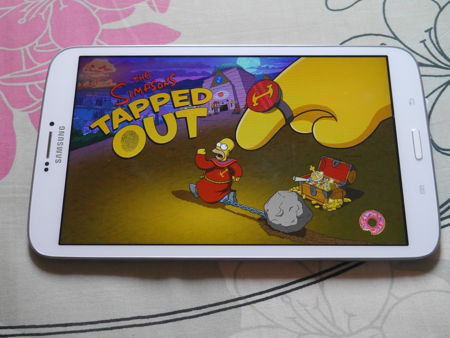 Conclusion
All in all, the Samsung Galaxy Tab 3 8.0 with LTE is a decent device, but it is definitely not high end if you would like to enjoy bragging rights and all that ilk. In a nutshell, I would say that this is an average tablet for the normal user – power users would want to look elsewhere, while beginners as well as intermediate tablet users would not put a foot wrong by picking up this tablet.