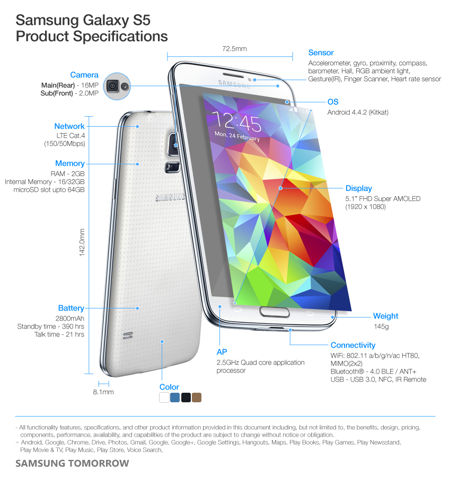 It does seem as though the advent of new smartphones continue to be a crowd puller every single year, no doubt about that. The iPhone kicked it off all the way back in 2007, and since then, we have seen our fair share of smartphone releases from various hardware manufacturers. The Samsung Galaxy S series really made its mark with the introduction of the Galaxy S2, and hence, it is not surprising to see the Galaxy S line go all the way to the Galaxy S5 now, where it has been designed for what matters most to consumers. It is said that the new Galaxy S5, unveield at MWC 2014 in Barcelona, Spain, will offer consumers a refined experience with innovation of essential features for day-to-day use.

Just what kind of goodies can one expect to arrive from the Samsung Galaxy S5? Well for starters, it will arrive with a new 16-megapixel camera at the back that boasts of an enhanced menu and user interface which would enable consumers to effortlessly take, edit and share photos. Touted to deliver the world’s fastest autofocus speed of up to 0.3 seconds where a smartphone camera is concerned, in addition to support for an advanced High Dynamic Range (HDR), the Galaxy S5 lets users enjoy natural light reproduction and color with striking intensity regardless of the circumstance. Not only that, there will also be a new Selective Focus feature that enables users to focus on a specific area of an object, all the while simultaneously blurring out the background. You can now achieve some “bokeh” shots without having to own a special lens kit, now how about that?

Other than that, the Galaxy S5 will also deliver the most advanced LTE experience and Wi-Fi performance, thanks to support for the fifth generation Wi-Fi 802.11ac and 2X2 MIMO, in addition to the ability to play nice with a large number of LTE frequency with LTE Category 4 standard. Some of the colors of the Galaxy S5 include charcoal Black, shimmery White, electric Blue and copper Gold.