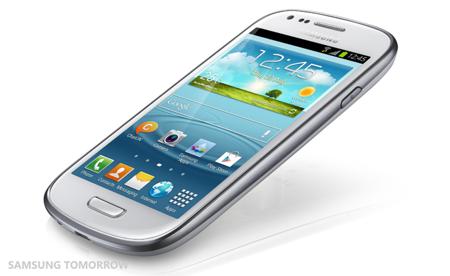 It is a known fact that there is undeniable tension between the two corporate giants in the world of technology at the moment – Samsung and Apple, with the former managing to claim up to $1 billion in damages from the South Korean conglomerate in a court ruling earlier this year, where Samsung was deemed to have infringed upon Apple’s patents. Incidentally, Samsung is one of the main suppliers of parts to some of Apple’s best selling devices including the iPad, leading to that added touch of intrigue. Well, the game of one upmanship continues between the two of them, where we do hear whispers of Apple preparing to roll out a 7.85” version of the iPad, appropriately calling it the iPad mini. Perhaps out of this rivalry, Samsung wants to go one up on Apple with their Samsung Galaxy S3 Mini by announcing it in Germany yesterday.
The Samsung Galaxy S3 Mini, as its name suggests, is a compact version of the South Korean conglomerate’s flagship smartphone, the Galaxy S3. The Samsung Galaxy S3 Mini will deliver a similar high performance, intuitive ease-of-use and nature-inspired design of its larger sized sibling, albeit with a slightly smaller display at 4”, making it the ideal choice for those who want to use their smartphones with a single hand.
As for the operating system of choice, you will find Android 4.1 Jelly Bean installed right out of the box, while delivering what Samsung claims as “stunning graphical capabilities, fast screen transitions, and an upgraded Google Now service featuring contextual search.” Sporting an ultra-minimal curved frame, the Galaxy S3 Mini will deliver a rich natural feel, while its 4” Super AMOLED display lets you view images in a generous manner in brilliant color and clarity. It will also come with S Voice, Samsung’s choice of an advanced natural language recognition software.
No idea on pricing just yet, but one thing’s for sure – if you always wanted the Samsung Galaxy S3 but didn’t really like its size, then the Samsung Galaxy S3 Mini might just be the smartphone for you.
Press Release