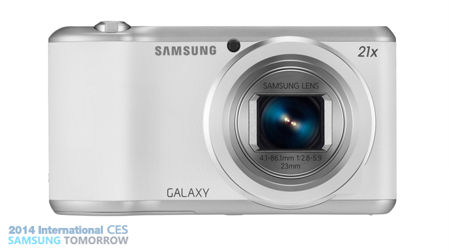 CES is upon us yet again, and you can expect a shebang of devices that will hit the market. The thing is, there are just so many new products that will be introduced, it could get pretty difficult trying to keep track of who releases what. Samsung, a regular player at CES and other trade shows these days, has just announced the Samsung Galaxy Camera 2, where this particular device will continue from where it left off by running on the Android mobile operating system, sporting a lightweight retro design that ought to get avid photographers talking, since this particular shooter gets even more social than ever before, delivering superior images in comparison to its predecessor.

The Samsung Galaxy Camera 2 will come with a brand new quad-core 1.6GHz processor to keep things running spiffy, while the Android platform also makes it snap to shoot, edit and share high quality images with your circle of friends and family. The 2,000mAh battery will also be able to let you shoot a whole lot more photos than you can ever image, making sure that you do not miss out on a single moment along the way.

Just when you thought that your smartphone’s camera is good enough for normal shots, the 16-megapixel BSI CMOS Sensor will be able to deliver vivid images that are rich in color and sharp in detail. Not only that, it will boast of a huge 21x Optical Zoom so that shutterbugs are able to get closer than ever to their subjects. Other hardware and software specifications of the Samsung Galaxy Camera 2 include 2GB RAM, a pre-loaded Dropbox app, Wi-Fi and NFC connectivity, and a 4.8” HD Super Clear Touch LCD display among others. Apart from that, it will come with its fair share of filters as well as Multi Motion Video support, letting you get a whole lot more creative than you want to. Pricing details remain to be known as at press time.