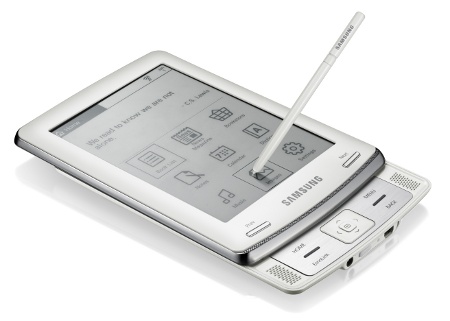 Samsung wants to rock and roll with their own eBook reader as well which they have dubbed the E6 eReader (how convenient). It will still take some time to see just whether this market is big enough to support so many players, as eBook readers don’t seem to be making that much of an impact in the world against regular paperbacks compared to how the MP3 format literally brought the CD industry to its knees, with the iPod gaining a humongous market share that Apple doesn’t seem likely to be giving up its throne in that department anytime soon. But I digress – the Samsung E6 eReader now only allows you to access your content easily, it also doubles up as a form of digital notepad, taking down notes as well as thoughts on the page directly, the ability to highlight content and sharing notes with friends and peers. Samsung has merged more than a million electronic titles, advanced handwriting capabilities and Wi-Fi connectivity into a single, easy-to-use device which we’ll look at in greater detail right after the jump.

What makes the E6 most outstanding would be its electromagnetic resonance (EMR) stylus pen that allows users the writing capabilities which are normally found only on traditional paper books. Should you wish to make annotations in the margins and record your thoughts and interpretations while reading, the E6 is more than happy to cater to that. Heck, even images can be modified easily via direct handwriting and memos, while those who prefer to get things down in a jiffy will look forward to its voice recording functionality that lets one make audio memos and annotations.

Featuring a slider form factor, the E6 comes with a 6” E-ink display at 600 x 800 resolution with 8-Gray scale for easy readability both indoors and out. It will suppor thte following formats – e-pub, PDF/a, TXT, BMP and JPG. Thanks to the built-in front speakers and head-phone jack, you can enjoy Samsung’s text-to-speech (TTS) technology in private or in public, while tuning in to your favorite MP3s when traveling. Wi-Fi connectivity is thrown into the mix as well, accompanied by Bluetooth 2.0 for wireless transmission. The 2GB of internal memory can store up to 1,500 books or 24,000 pages of memos, where it is augmented by a microSD memory card slot.