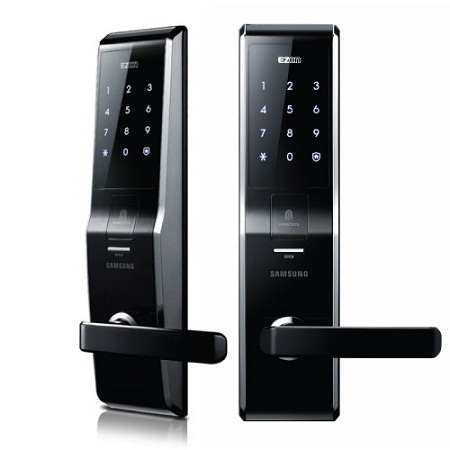 While most of us know by this point that monsters aren’t going to hop out from under our beds and eat us, there’s still the fear that we may not be safe in our own homes. Hopefully it’s just mild paranoia, but if you’ve got that gut feeling that something’s wrong then you’re probably on the verge of hiring security. If you think that a lock and key just aren’t enough and also have wads of cash lying around, then why not go for a digital system that gives you more control?

If you have the cash to get this sort of setup, the Samsung Digital Door Lock might be able to aid you in your quest for home safety. This can use either an access code or a fingerprint to make sure that you can get in, and the only other people who can pass the threshold are those you have approved. There’s also a key in case the pin or fingerprint are on the fritz, or you don’t want to add a nosy neighbor for longer than a weekend to feed the cats.

This runs off of four 1.5V AA alkaline batteries, and will be compatible with doors that are 40-55mm thick. It will likely be a bit of a bother to install, but if you get the sizing of the holes right, the greatest battle of the process will have been won. This comes with 2 keys as a backup and if the batteries die unexpectedly, an emergency 9V battery can help you out. You can have 4-12 pins and up to 100 fingerprints logged in this device, but to get this finery you’ll be looking at paying around $346 for one.