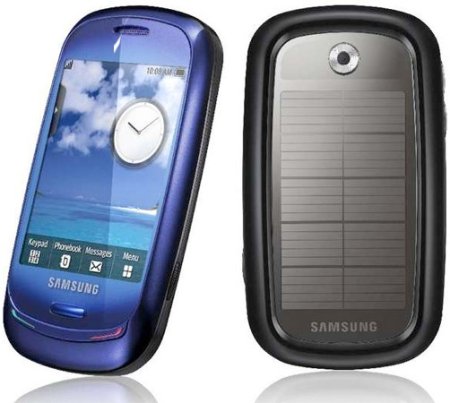 Samsung is first off the blocks with yet another innovative cell phone – the Blue Earth. This handset is touted to be the first solar powered full-touch screen device from the Korean consumer electronics giant, and is in line with the company’s vision for environmental sustainability. It will be released under the slogan: “The Blue Earth Dream: Eco-living with SAMSUNG mobile”, and shows the world that Samsung is reinforcing its commitment to protect the environment via the design of eco-friendly products as well as a relevant programme of activities for its large customer base. Needless to say, all things cellular will see action at the upcoming Mobile World Congress 2009 in Barcelona, Spain, that will happen next week.

Blue Earth was specially designed to symbolize a flat and well rounded shiny pebble, although we do question the viability and practicality of such a design. Blue Earth is also touted to be the first solar powered full-touch screen phone in the world, where the solar panel is located right behind the handset for users to generate enough juice to carry out that emergency conversation or send a text message when there is nary a power outlet in sight. We guess this is a start of an era where outdoor-loving folk need not carry tons of spare batteries, but leave their phones to bask under the sun during the day in order to recharge while they’re busy setting up camp or hunting for some game.

To reinforce its green credibility, Blue Earth is made from recycled plastic known as PCM which is actually extracted from water bottles in an effort to reduce fuel consumption and carbon emissions during the manufacturing process. Both the device and charger are free from harmful substances such as Brominated Flame Retardants, Beryllium and Phthalate. Unfortunately, we have no idea what the performance is like as well as other features, but guess we’ll find out at MWC next week.