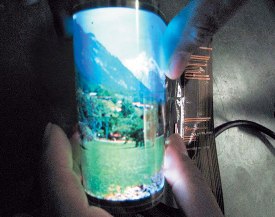 We are all looking forward to the days when our computer screens will be as thin as a piece of paper, and it would appear that Samsung’s new ultra-thin flexible AMOLED screen is about ready to herald in that era.

Sure, this 6.5 inch flexible OLED that you see here is just a prototype, but you can at least see how flexible it is. In fact, I wouldn’t be surprised if you could spindle it. That is, roll it up like a kid who plays “telescope” with an ordinary piece of paper.

I can think of one application for this technology that I saw in a movie. In Red Mars, Val Kilmer has a mobile computer that must have a very flexible AMOLED screen. This screen took up a minimal amount of space, as he was able to retract it into its tiny case like a window blind.

I realize that many of you might not remember that 2000 movie, which was set in the year 2050. As I recall, the AMOLED was able to recognize Martian landmarks just by holding the screen up to them. I’m not certain if Samsung is working on that, but they will probably have it perfected by the mid-century. That isn’t a quote from the company, but it is a personal prediction.

In the meantime, let us all sit back and dream of classrooms of the future, where the teacher hands out a test on very flexible AMOLED paper. I would imagine that after the students were finished, he or she could stack them in a pile, put them in a machine, and they would have their grades in seconds.

Think of other uses for AMOLED displays while you are at it, and put them in the comments section.