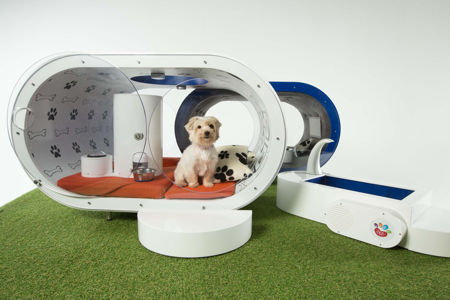 I know that Samsung is famous for their consumer electronics – and this would certainly include their smartphone range, but this does not mean that the South Korean company is a pushover when it comes to being creative. No sir, as this just goes to show that there is a streak of creativity in them, which is extremely crucial if a company were to remain ahead of the competition in the long run. Well, what has Samsung come up with this time that warrants some coverage? We are looking at an architect designed, futuristic kennel that costs a whopping £20,000, now how about that for attention grabbing news?

This futuristic kennel is said to represent the ultimate when it comes to luxury living for your four legged friend, where it has been dubbed the Samsung Dream Doghouse. The Samsung Dream Doghouse required half a dozen weeks in order to become reality, being a collaboration of a team of 12 designers and fabricators. It has been said in a survey that 64% of dog owners believe that their pets would benefit from more technology and gadgets, while some of the creature comforts that you – or rather, Fido, can expect would be an entertainment wall, a paw operated snack dispenser, a ‘woofing’ tannoy system, and a hot-tub spa, among others. We do wonder whether there will be in-room dining or butler service to clean up after your pet though.

There will be a couple of areas in this prototype indoor kennel, where one is for rest and relaxation, while the other is meant for dining and entertainment, in addition to an outside astro-turfed leisure area. In the back kennel lies a fully padded sleeping area in gun-metal grey fabric with dog-proof leather button detailing, accompanied by luxurious bone design pillows, while there is a wall mounted Galaxy Tab S for your dog to view – and enjoy two-way communication with their human counterparts, with a push-to-woof call bell in order to summon the attention of their owner, and all of it are made from fire retardant material.

Not the best way to spend your money, but it certainly is a work of art.