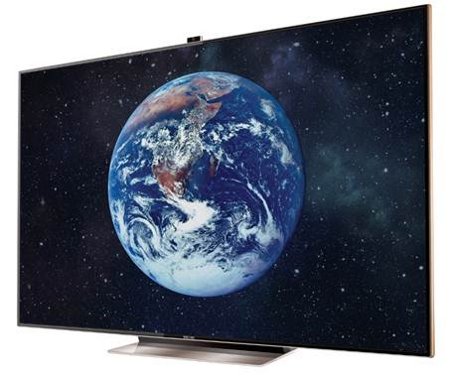 You know something? We humans have very basic needs, but the list of wants – now that becomes a little bit tricky. After all, the world has so much to offer, and basically anyone with enough money or power (usually both) are able to live out an extremely hedonistic lifestyle. Assuming you have been dreaming of a TV upgrade in your living room since you got that new fancy URC, and told yourself that you want to blow your budget this time around without being bothered by the financial consequences, what are some of the options at your disposal?

I would certainly tout Samsung’s latest flagship TV – we are talking about 75 inches of diagonal viewing goodness here, where the ES9000 LED Smart 3D TV is said to offer a larger-than-life, extra-premium experience alongside a timeless new design concept which will boast of a beautiful rose-gold-colored finish. All of this crammed into a form factor that is extremely slim at 0.31 inches for its curved bezel without any visible seams, and I can safely say that you’ve got a winner here.

Not only that, the Samsung ES9000 LED Smart 3D TV will also come with it, another first in the industry. We are looking at a totally new Angry Birds App for Samsung’s Smart Interaction-enabled TVs. This means you can now fling those emo avian friends using nothing but gesture controls sans the need for a controller. It might take some getting used to at first though, since most of us are so used to flinging those birds across the sky (and space) using a touchscreen display. Angry Birds is said to come as a free download later this month on the Samsung 2012 LED 7500 and up models and Plasma 8000 models. If you have more patience, a dedicated app for Angry Birds animated content will be available later in 2012 as well. Either that or just get yourself a streaming box like the Nvidia Shield TV which will allow you to play all kinds of games on your TV.

Expect the Samsung ES9000 LED Smart 3D TV to hit the general market later this August for a cool, cool price of $9,999.