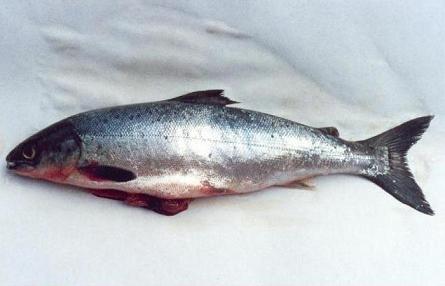 Professor Andrew Steckl of the University of Cincinnati, an expert in LED technology, has come up with a new way of creating better and ‘greener’ LED’s: DNA. He has discovered that DNA alters the motion of electrons in an useful way, allowing for more photons (and thus light) to be created.

However, DNA is not easy to replicate, so a renewable, un-monopolized source for it had to be found. The answer was salmon sperm. Why that? Because it’s considered a waste product of the fishing industry, and discarded by the ton.

Of course, it’s not easy to hold a giggle when hearing about the ‘technology’ here. However, a pointer as to how serious this is is the source of funding: the US Air Force. According to Steckl, the USAF had been working with DNA before, and thus approached the researcher with “We know that you know how to make devices”. Since then, the research work has been done by Mr. Steckl and Dr. James Grote from the Air Force.

What’s actually being done here is using DNA for the electron reflection layer in a LED. This way, more electrons are kept ‘inside’ the LED, resulting in more collisions and a greater emission of photons. The results can be seen in the following comparison picture. The top row shows regular LEDs, and the bottom one Prof. Steckl’s BioLEDs. 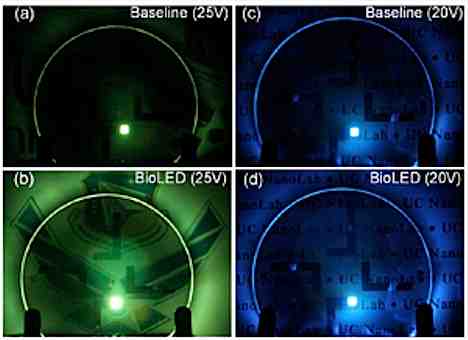 A funny line of the Prof would be: “I’m receiving salmon sperm from researchers around the world wanting to see if their sperm is good enough.”. Salmon sperm isn’t the only material that DNA can be easily extracted from, but it’s used because it’s an abundant waste product. The agricultural industry would also be a virtually infinite source of materials.

The long-terms plan is to continue replacing non-organic parts of LEDs with organic ones, in order to create ‘green’, bio-degradable and more efficient components.