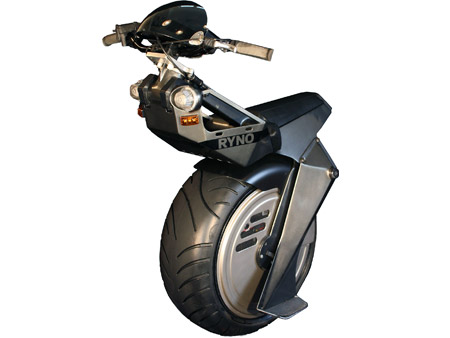 For some reason reason, there has been an excess of one wheeled vehicles like the Honda U3-X, the PUMA by GM and Segway, as well as the eniCycle.

So, why should I report on the RYNO? Well, you can see from the video here that, from the back, this looks just like someone who is riding a motorcycle.

Seriously, if I was behind a person riding the RYNO on the freeway, I would probably just think: “oh, it is a guy (or girl) on a motorcycle”. Then if he or she were to turn a corner, I probably would say: “hey, that thing has just one wheel!”

This is actually the reason why I like the RYNO. I think that the Segway has this reputation of being sort of white and nerdy. If you don’t believe me, just listen to the song “White and Nerdy” by Weird Al Yankovic.

However, the fact that I was able to mistake a RYNO for a cool motorcycle, even if it is only from behind, is a testimony to balanced vehicles everywhere.

I’m not certain if this RYNO is going to be mass-marketed, or if it simply a concept vehicle of some kind. Either why, I would love to know what RYNO is supposed to stand for. Perhaps it is not an acronym, but just put in all caps to make it sound cool like vitamin water is in all lower case letters.