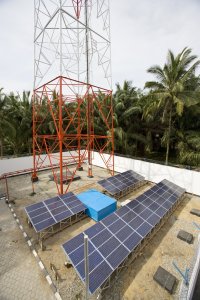 Orange Guinea Conakry and Ericsson have teamed up for a good cause – both companies are looking to deploying over a hundred base stations that will not require a drop of power from the local power grid, as they will all be powered by harnessing the sun’s rays. These base stations will in turn help to connect remote parts of rural Africa so that folks no longer need to send messages to one another using smoke signals or eagles with papyrus notes attached to their feet. No sir, with these perpetually powered base stations all year long, one will be able to call their loved ones a few hundred miles away and be connected in an instant – it would really go down well with solar powered cell phones though, so hopefully someone will step forward and make really affordable models.

These energy efficient Ericsson base stations will feature a hybrid diesel-battery solution and solar panels. Orange hopes that this will help them increase cell phone coverage in both rural and urban areas, and aims to accomplish this while remaining on track to reduce CO2 emissions by 20 percent by the year 2020. This is nothing but good news for remote areas without an established power grid, and we hope that such technology will soon be able to be more power efficient so that not only base stations are powered by the sun, but other appliances as well to bring a sense of modernization deep within these rural areas.

The Ericsson BTS 2111 radio base station is a main-remote solution without any active moving parts such as cooling fans. It reduces energy consumption up to 50 percent, allowing the site to be fully powered by solar energy, supported by a battery bank for 24/7 operation. This rollout program supports the sustainability initiatives of both Ericsson and Orange, focusing on reducing the carbon footprint while making communication more affordable and accessible. Orange Group intends to have more than 1000 wholly solar-powered base stations in its African operations by the end of 2009.