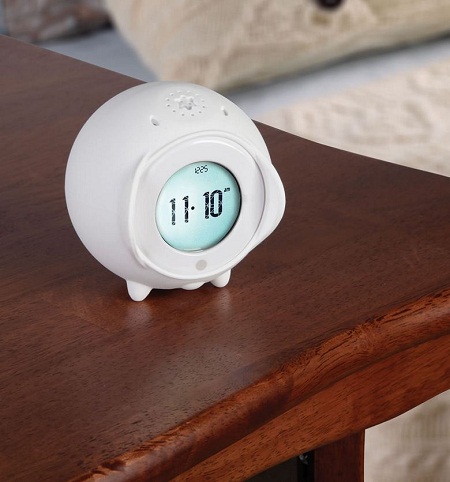 Upon first waking up in the morning, we don’t exactly have complete control over our motor functions. You’re still coming out of a dream state, and reality doesn’t quite make sense just yet. During the week though, the only thing you know for certain is that your alarm clock is blaring, and needs to be shut off. Normally it ends up being slapped around until you hit the snooze button, which sometimes results in you being late for work.

Even though we don’t like the notion of being yanked from sleep by an even more annoying alarm clock, sometimes it’s necessary. If you need something like the Runaway Alarm Clock, then chances are you’re at your wit’s end with yourself. This spherical shatter-resistant ABS-bodied alarm clock will spring to life at the chirp of your alarm, and roll away from you in a sporadic pattern as fast as it can.

This plays all sorts of seemingly cute sounds as it rolls around that will make you want to smash this thing with a hammer when it wakes you up. There is an option to play your own tunes through it as well. If you’ve already learned the art of making yourself get up, or get too bothered by it scampering away, then you’ll be pleased to know that the runaway function can be disabled if necessary. It will take 3AAA batteries, and will cost you around $60. This can stand drops and shocks, but tossing it against a wall might break it (just so you know).

Available for purchase on Hammacher