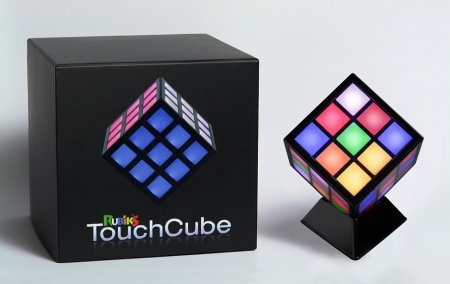 Rubik’s Cube is one puzzle game that is ranked among the classics for obvious reasons, and we’re pleased to report that technology has finally caught up with it in the process. Taking a cue from the world of new devices where most of them feature some sort of touch technology, the humble, sticker-laden Rubik’s Cube is now adorned with touch technology, and is known as the Rubik’s TouchCube instead. This is a milestone where puzzle toys are concerned, and holds the honor of being the first completely electronic solvable Cube in the world. What used to take several turns to solve requires deft touches and swipes to bring the puzzle game to a whole new level. The Rubik’s TouchCube will debut in New York City next week at the American International Toy Fair that will be held from February 15th to 18th.

Sounds pretty amazing, eh, so that alone begs the next question, “How does it work?” For starters, the Rubik’s TouchCube comes with integrated touch sensor technology on all its six sides, complete with a motion-detecting accelerometer and colored lights in every square. Heck, it will even mimic the movements of the original 3×3 cube – all you need to do is swipe a finger across three squares and the lights will follow to turn the side of the Cube. If you happen to make an “L” shape, then it will turn the top face of the Cube instead. It will be interesting to see whether existing Rubik’s Cube solvers will be able to break the world record time in solving using a touch interface, and could we look at a couple of seconds now? Do bear in mind that this could be rather challenging as the motion-detecting accelerometer will only recognize moves made on the top side of the Cube, so that the player’s other fingers will not affect the lights on other sides when holding it.