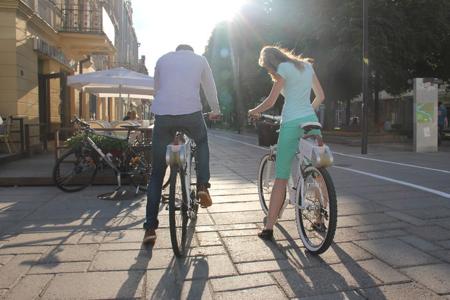 There are bicycles, and then there is the next step up – electric bicycles, which would definitely come in handy especially when you live in extremely hilly areas such as San Francisco. Of course, purists would want to argue against the presence of electric bicycles in the market, touting that it takes away the experience of pushing your physical self to the limit, but others who are more practical would not mind getting some assistance from technological advancements, too. The thing is, purchasing an electric bicycle outright from the market could be pretty expensive, as the cost could run into a few thousand for the higher end models, which is why the Rubbee device that you see here – a Kickstarter project that is extremely close to achieving its funding goal with four days left, could be a viable alternative.

The Rubbee is an easy conversion device which will be able to transform your current, manually powered (pedal powered in other words) bicycle into an electric one, taking just a matter of seconds to get the job done. The Rubbee would tip the scales at just 14 lbs, and it is capable of offering assistance as you cycle for up to 15 miles of travel on a full charge, hitting a top speed of 15 mph along the way, courtesy of its integrated battery pack which carries a full charge of 20,000 mAh. The Rubbee will take approximately 2 hours to fully juice up, so you can always do so at the end of the day so that it can be ready to jump into action the next morning.

Installation of the Rubbee is simple and painless – you need not have to tinker around with wires and tools the way a standard conversion kit requires you to, but rather, it boasts of a design which was specially intended to reduce wear on your bike’s wheel, where kinetic force will then charge the Rubbee’s battery pack, and if you need a break during the ride, you can also ensure that the tire does not touch the Rubbee. Would the £799 price tag slapped on the Rubbee hold you back from picking one up?