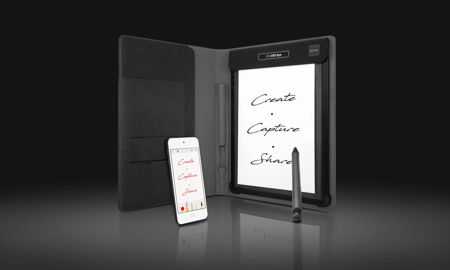 The folks over at Royole Corporation are certainly a busy bunch, having come up with a 3D mobile theater just last month, and now this leading innovator and manufacturer of next-generation human-machine interface technologies and products have developed the RoWrite smart writing pad. The RoWrite smart writing pad will be based on the company’s unique and patented flexible electronics technologies, where it has been specially designed to be able to capture, store, and share all different kinds of handwritten material in an accurate manner for digital applications.

This particular unit is capable of capturing real-time writing when it comes to using regular paper and traditional pen refills. Not only that, users will have the added advantage of being able to obtain a digital record immediately, as it will be sent straight to their smart device, computer, and to the cloud. Alternatively, if you would like to transfer all of that digital information at a later time, you are free to do so. With the RoWrite, handwritten notes or drawings can be reproduced directly onto any smart device or computer as it will be saved digitally. It can also function without the need for a smartphone or tablet, as the content can be saved onto the RoWrite first for synchronization later on.

Sporting 2,048 force-touch handwriting sensitivity, this would be close to an accurate representation of the written material, which includes pressure intensity. Hence such technological capability virtually guarantees that there is no form of writing break off or delay. One can also take advantage of the RoWrite App installed on a paired device in order to edit or enhance digital copies in real-time. Through the app, you can choose from different writing instruments, alter stroke thickness, or even get creative and add up 20 colors. Heck, why not digitally erase and capture a video of your creation in order to share with coworkers, family, and friends later on? The Royole RoWrite will be accompanied by a premium leather folio for added protection, where it will have an asking price of $129.99.