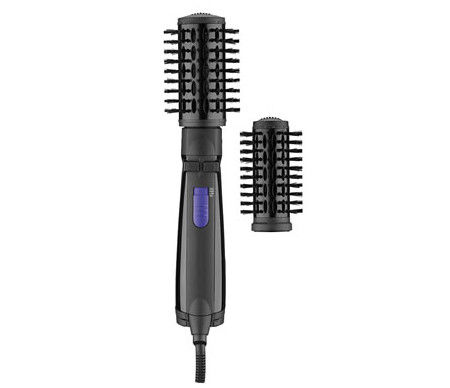 If there is one thing that the men should realize by now, it would be this – women love their hair, never mind that some of them do not mind shaving their head bald for a good cause. Basically, their hair is their crowning glory, and it is no surprise that they do spend a good amount of their time in styling themselves before they leave the home for whatever tasks that there are ahead. With that in mind, different kinds of brushes have already hit the market, including the Anti-Static Ionic Hairbrush, but here we have something for the lazy – or those with weak wrists, the $79.95 Rotating Styling Brush.

The Rotating Styling Brush lives up to its name indeed, being a rotating brush that styles and dries hair at the same time. Rather than having you fumble with a separate hair dryer and styling brush in each hand, this is one convenient two-in-one tool which claims to reduce styling time by 50%. It is made possible via a gently rotating brush head which will be affixed to a tourmaline ceramic coated heating center. The unit’s core will then release negatively charged ions which will break down water droplets in order to increase the rate of evaporation, resulting in assistance to eliminate frizz and static electricity for easier hairstyling. It features a salon-quality 500-watt motor that will blow air directly through the brush, allowing you to rotate the bristled head 360° in either direction with the touch of button. Choose from three temperature settings, and it runs on AC power.