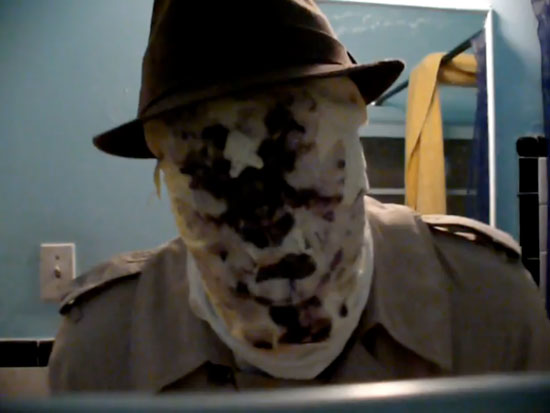 One of the most popular characters in all of comic book history is the mysterious Rorschach from the Watchmen graphic novel series by writer Alan Moore.

If you’ve read the comic book or seen the movie, then you know that Rorschach is a masked vigilante who wears a mask that is like the ink blots of his namesake.

In the comic, it is explained that the mask is made of a cloth that is heat and pressure sensitive. Think of it as black and white Hypercolor from the eighties.

It was a special effect in the movies, but apparently the transforming inkblot face is possible by using some type of special paint. There is a video after the jump if you want to check it out for yourself.

All it takes is some thermochromic paint which is the same stuff used in mood rings. The materials only cost about $70 which my Source reveals is enough for 50 masks.

So if you are trying to raise up an army of Rorschach’s, this would be your starting point. This would probably be for a V for Vendetta movie ending, which is another Alan Moore comic turned movie. Even though he doesn’t put his name on some movies inspired from his comics.