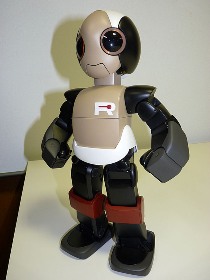 You got to admit that Ropid the robot looks like it should have been in the recently released Astro Boy movie. By the way, that movie is actually pretty good, just so you know.

Ropid is the creation of a Kyoto based group known as Robo Garage, and it has the ability to run and jump. By the way, the robot is programmed to jump with a vocal command. In other words, if you say “jump”, then the robot may not say “how high”, but it will jump as high as it can, which is 8 centimeters high.

That’s not bad considering Ropid measures 38 centimeters tall, and weighs 16 kilograms. The robot has 29 joints and four gyro-sensors, and is powered by a lithium-ion battery. By the way, the vocal commands will also run when you tell it to run, and stop when you say stop. Now if it could run and jump, perhaps it could beat the Olympic long jump record.

So far, there is no plans to market this guy, but I think that Wowwee would be all over this thing. Ropid’s movements aren’t as fluid as say, a human, but it is enough to beat the snot out of any toy robot out in the market right now. Now, if only it could fold up into a car or something.